How AI In Transportation Is Changing The Face Of The Industry

From minimizing accidents, traffic management, ticketing and preventive maintenance of fleets, AI has the potential to transform the transportation sector.

The adoption of new technologies has helped the transportation sector innovate and evolve over the years. Today it is time for the industry to leverage Artificial Intelligence ( AI). AI, a technology that provides machines the ability to think like humans, is transforming the industry. The application of AI in transportation can help the industry in several areas including passenger safety, traffic management, and energy efficiency, amongst others.

The ocean occupies 70% of the earth. In the past twenty years, the sea and inland waterways have developed and undergone many changes. Like the ship traffic has grown denser, calling for maritime safety and maritime surveillance. Controlling and operating naval-based systems using radar and vital communications become difficult due to changing weather and sea conditions.

According to Google, in 2018- out of the 40% of accidents that occurred in marine, half were due to human errors. Even radar, navigation systems, GPS tracking, and radio satellite communications weren’t able to prevent the occurrence of real-time collisions. It can be detected through the navigation system In automated ships. The ship uses an AI-based integrated system, which uses sensors and real-time predictive analytics tools to locate ships/objects on the plane,  approaching from different directions. Based on the location of other ships, the AI-based system can determine the best course of action that minimizes the occurrence of a collision.

Roadways are one of the sectors where Artificial Intelligence is applied and used 100% throughout the world. The applications include traffic monitoring systems, real-time driving time, sharing economy, self-driving, and self-parking, etc. mainly focusing on solving problems like peak traffic hours, vehicle crashes, and pedestrian safety.

AI has its applications in both public and commercial purposes, for better safety the systems like traffic monitoring and controlling system- which moderates the traffic through AI-based traffic signaling system, in the peak and slight hours. With an advanced autonomous driving system the self-driving cars, trucks, and other vehicles follow strict traffic rules (lane, minimum distance, speed limit, etc.) it helps urban populated cities to solve major traffic problems. With advanced automated driving, during long hours of driving the driver can pay attention as the vehicle takes care of everything, the system reduces fuel consumption when the vehicle is idle, which reduces pollution and saves energy consumption.

The sharing economy is an application AI that motivates the public to share a ride/car, ex-Uber which reduces the density of the number of vehicle on the roads that reduce the rate of a vehicle crash.

Here are a few examples of advanced AI applications in aviation, crew management and rescheduling a crew member is a tough task in today’s aviation industry because the crew manager needs to dig in large datasets for replacement and it’s a time-consuming process. Jeppesen, a Boing company, has solved the crew management problem using AI. Their AI-based crew rostering system based on the data list regarding scheduled dates, reschedule request of crewmembers, flight attendants, pilots, the system automatically schedules and manages crew members efficiently.

Southwest airlines use machine learning algorithms and data science technologies operating the logistic operations and United airlines in collaboration with Amazon Alexa, has a virtual assistant named “Unitedskill” these robots help customers in ticketing and check-in process through voice and text commands.

During the 19th-century railways are the most innovative and major factor in the industrial revolution and contributed as an important factor for many country’s economic growths. With the innovative changes in other modes of transportation from decades, railways lagged behind and it comes into the limelight as the big data, machine learning, and NLP algorithms with innovative technologies applications gave rebirth to it.

AI is improving the operations, maintenance, and manufacturing of rail operations that are keeping railways in a competitive field to fight to direct with other modes of transports. The AI technology has changed the face of railways traditional steam engines to electromagnetic engines that operate at four grade- driverless to unattained staff.

European rail traffic management system is the first application where AI is used in railways. It provides the trains with a driver assistance system.  The ERTMS wanted to build a single command system for signaling and communication. The beacons are integrated with European signal tracking systems and attached to the tracks, as a train passes through it is able to communicate the commands with the train regarding retrieving information and driving assistance.

AI and other data science technologies like Machine learning and deep learning are used to track the data using sensors placed on trains and critical infrastructure components.

AI can also help in fleet maintenance through predictive maintenance that can reduce unexpected maintenance costs and reduce fleet reserves as in case of any breakdowns.

The potential of AI in transportation is huge. What we are witnessing is just the tip of the iceberg. As the adoption of AI increases, we will see many more innovative and disruptive applications of AI in the transportation industry.

Looking to embrace AI in your transportation business? Are barriers to investments, time, and resources stopping you from leveraging AI in your business? Try Qualetics, our AI data platform, and build advanced AI capabilities for your business. Book A Demo today! 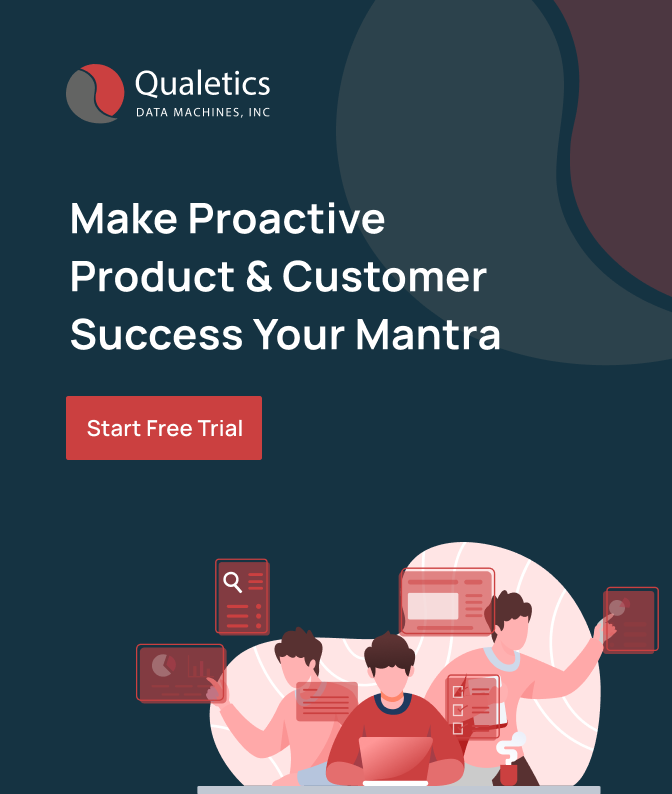